As a little girl, France meant 1 thing: Paris. Outside of glowing images of the Eiffel Tower, bustling bistros, and baguette, I’ll admit I knew very little. My horizons were broadened once I began studying French in school and even more so when I spent a semester at the Sorbonne. But only since packing my bags and moving back here after graduation have I truly been able to look beyond the city of lights to the other regions of metropolitan France, each of which boasts a unique character — a “claim to fame,” so to speak.

Bring up Lyon and conversation will invariably veer towards the cuisine. With Provence, it’ll be the most beautiful sun-drenched hillside villages that you must visit. And the Loire Valley? Castles.

“Be sure to pack a raincoat and an umbrella” was the advice I received upon mentioning my latest plan to visit Saint-Malo, a coastal city in the northwest of France — and for good reason. Bretagne, also known as Brittany, is renowned for its gray skies, blustery winds, and persistent rainfall. The Bretons may be dealt the short end of the stick when it comes to Mother Nature’s graces, but they certainly don’t allow the rain to drench their spirit. From the often-displayed white and black flag to bi-lingual road signs in French and Breton, evidence of their Celtic cultural heritage is ubiquitous.

It’s impossible to talk about Bretagne without also mentioning buckwheat, a crop that thrives in the region thanks to the wet climate.

Unlike cereal grains, buckwheat is a fruit seed similar to rhubarb or sorrel and is loaded with antioxidant-rich phytonutrients. Once cultivated, the whole grain is ground into a flour known as farine de sarrasin or blé noir, one that lends a distinctly rich and earthy flavor to the traditional Breton galette.

A few months back, I decided it was about time I made savory crepes for myself. Considering I’m inexperienced and sans a proper crepe pan, the result wasn’t as offensive as I expected. Maybe a little too thick, but not catastrophic. 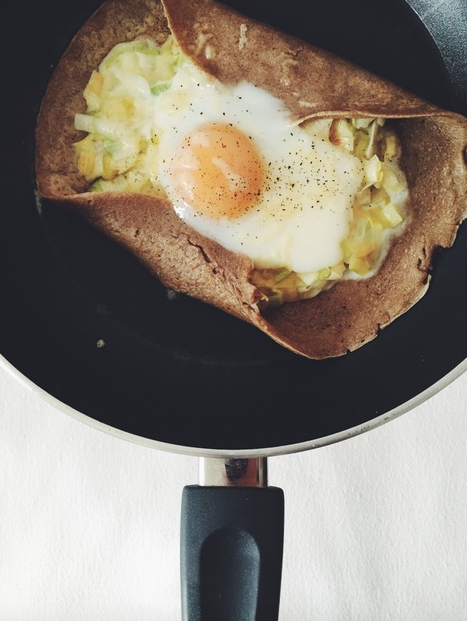 Only after visiting Bretagne and reading more about this local specialty did I realize that I committed a rookie mistake by adding milk and eggs to the batter when true galettes are made with just 3 ingredients: buckwheat flour, water, and salt.

Sounds simple enough, but trust me (and David Lebovitz) when we tell you there’s an art to the perfect galette — one that’s thin and slightly crispy around the edges while somehow remaining intact when the sides are gently folded towards the center.

With an abundance of crêperies lining the streets of Saint-Malo, it’s difficult to discern which reign supreme. However, our good ol’ friend TripAdvisor led us away from the main tourist strip to some of the best, hole-in-the-wall joints in the city.

At Crêperie Margaux, I choose a goat cheese, cherry tomato and egg combo with sunflower and pumpkin seeds. 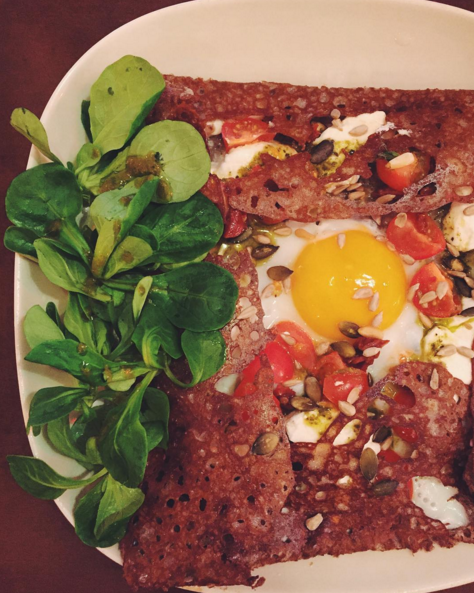 This vegetable galette from Crêperie Gallo was loaded with stewed tomatoes, spinach, mushrooms, cheese, and an egg. 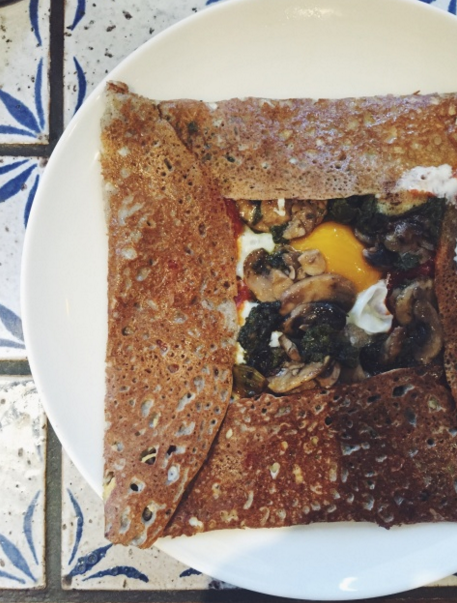 La Rose des Vents offers a wide selection of traditional galettes in addition to meat dishes, large salads and omelettes in case you’re in the mood to switch it up a bit. Since I could never get tired of buckwheat, I decided to go with a leek, tomato, mushroom, emmental, and egg galette. 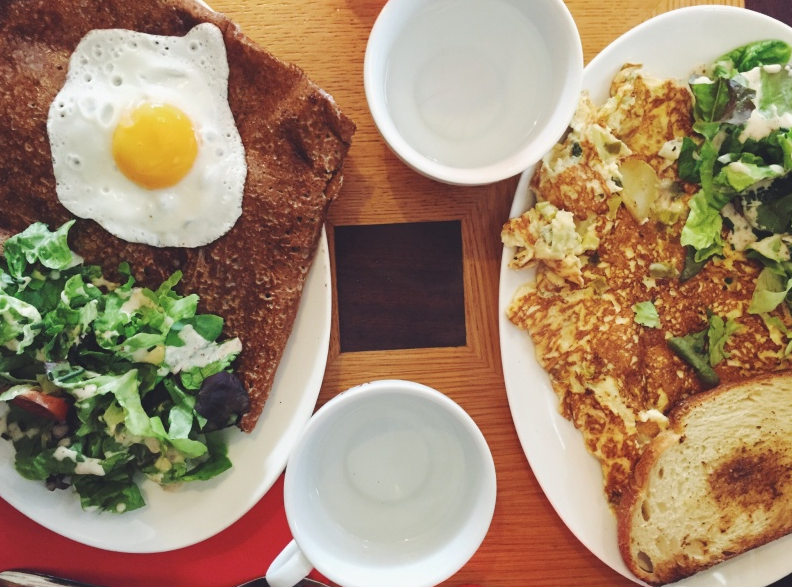 As serendipity would have it, we stumbled upon Breizh Café Le Comptoir and were drawn in by the sleek, raw wood interior. Little did we know we were in store for anything but an ordinary crepêrie experience.

Breton-born Bertrand Larcher is the mastermind behind Breizh Cafe, a France-meets-Japan chain of eateries and specialty food stores located throughout Paris, Saint-Malo, Cancale, and Tokyo. If you’re like me, you’re probably wondering what could possibly be similar about French and Japanese cuisine. After all, coq au vin and sushi don’t necessarily go hand-in-hand.

According to journalist Michael Steinberger, however, it all boils down to a less-is-more approach to food, one that emphasizes “seasonality and terroir” while allowing quality ingredients take center stage without unnecessary frills or adornments.

“… the Japanese have proved to be so adept at French cooking,” writes Steinberger, that “there are said to be around two dozen French restaurants in Paris with Japanese chefs at the helm.” (You can read more about the whole slew of Japanese chefs making a mark on the Paris food scene –> here.)

I started with an apple cider vinegar-pickled vegetable salad. Next, I chose a smoked salmon, ikura salmon roe, crème fraîche, egg, and dill galette. This hearty yet subtle “crêpe autrement” was served in the form of a roll, a not-so-subtle nod to the traditional Japanese sushi roll. Just steps away from Breizh Café is La Maison du Sarrasin, an épicerie affiliated with the restaurant. Pop in for a visit and you’ll be greeted by shelves stacked high with all-things buckwheat from the traditional flour to pasta and cookies. 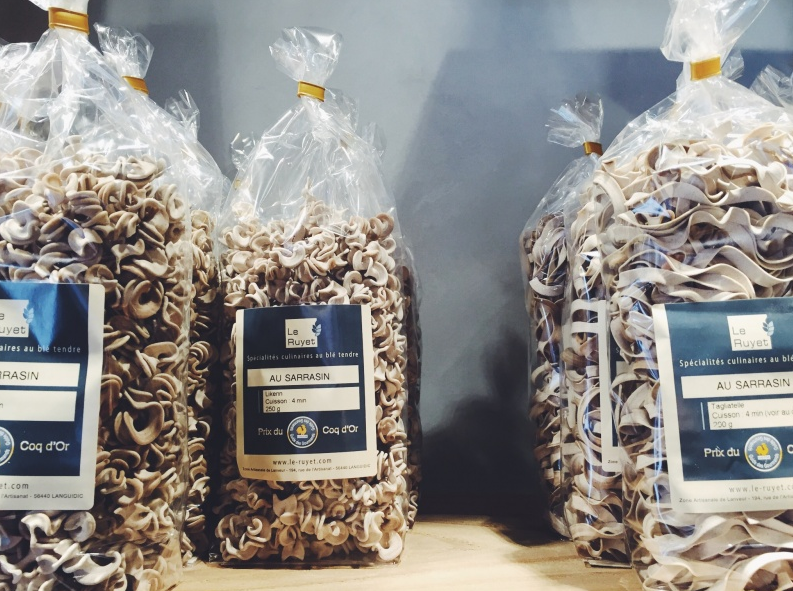 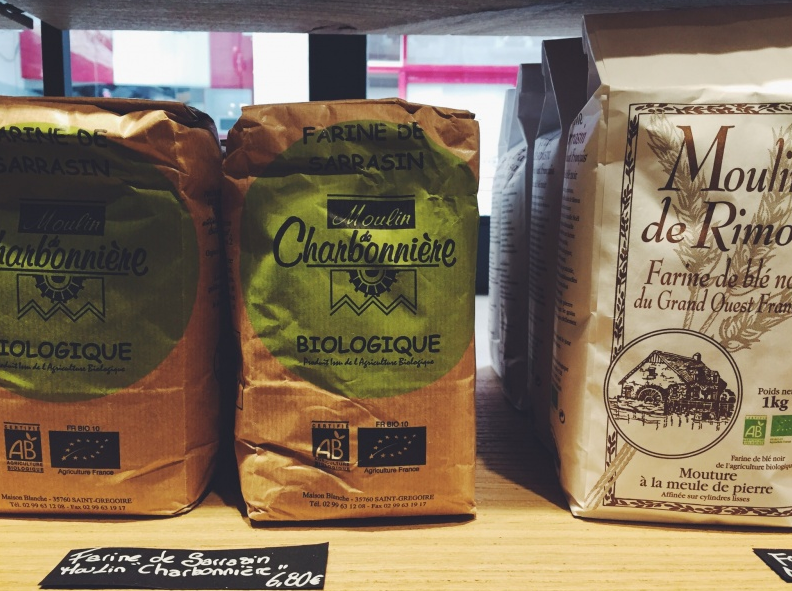 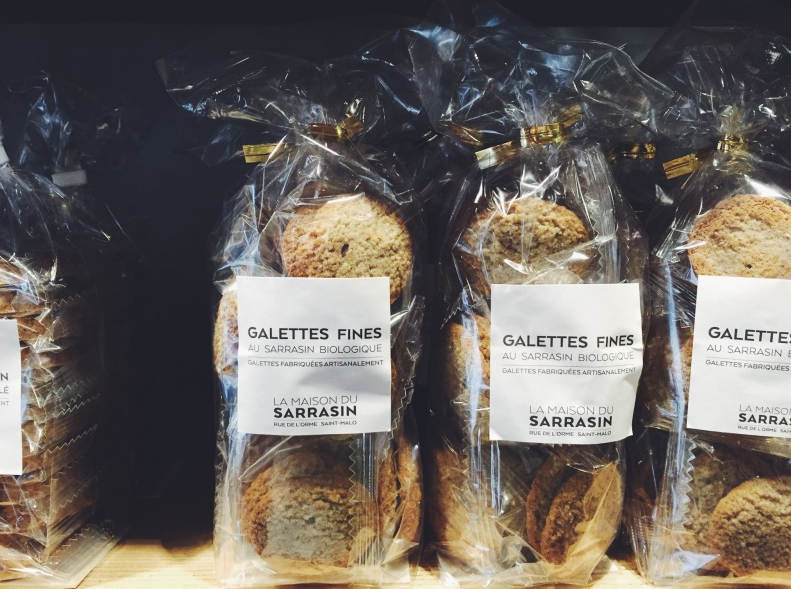 Saint-Malo fed me well and, fortunately enough, Mother Nature wasn’t too cruel. In fact, there were more sunny days than rainy ones.

Suffice it to say that I’ll be back for you, Bretagne, and your buckwheat.

3 thoughts on “a taste of Saint-Malo”