A seafood lovers’ slice of heaven…

That’s the advice I heard countless times in the weeks leading up to my trip to Lisbon. That, and tiles. Oh — and I was also warned to wear sturdy, comfortable shoes since cobblestone streets are no joke — but that’s a post for another blog.

But where were we? Oh yes, seafood.

Portugal boasts Europe’s highest fish consumption per capita, with cod at the forefront. In fact, you’ll be hard-pressed to find a restaurant without this flaky white fish on the menu, either dried and salted (aka bacalhau) or fresh (bacalhau fresco).

My first foray into the cod world came on day 1 at Pinoquio, a bustling restaurant just a stone’s throw away from our hotel, which was conveniently located on the main thoroughfare of the city. Although initially put off by its slight touristy vibe, we were too hungry and jet-lagged to seek out an alternative. Plus, the concierge included it on his list of quote-unquote authentic restaurants, so we decided to give it a go.

It didn’t take long for us to realize that this seemingly touristy hot spot was anything but. The main dining room was filled to the brim with locals, clearly on a first-name basis with the waiters. The roaring sounds of conversation and deep-belly laughter that come after one-too many glasses of sangria reverberated off the walls, giving the restaurant an undeniable buzz to temporarily jolt us out of our semi-conscious, jet-lagged funk.

The fresh cod was served family style alongside roasted potatoes, stewed tomatoes, and garlicky green beans — all drenched in a generous drizzle of olive oil. Fortunately, there was a seemingly never-ending basket of warm, buttered Portuguese rolls to sop it all up, and the requisite side salad to help us feel just a tad bit more virtuous.

Of all the seafood restaurants in Portugal, Cervejaria Ramiro takes the cake. At least, that’s what Yelp (and Anthony Bourdain) told us. And if I’ve learned anything during my time abroad, it’s that Yelp is always spot on.

So on our third night, we hopped in an Uber (which, by the way, is SO cheap in Lisbon) and headed to the infamous seafood spot with high hopes and grumbling stomachs.

After a grueling hour-long wait spent in a staring contest with the live fish in their gigantic tanks, our number was called and we were led upstairs, weaving through the tightly packed tables, rowdy toddlers, and bustling wait staff. Once seated, we were greeted by a friendly gentleman who proceeded to whip out a tablet and scroll through the menu options — an impressive technological feat for a restaurant that’s been around since the 1950s.

We must have been wearing our American ignorance on our sleeves, because he kindly volunteered to select the most popular fishes for us — to which we eagerly accepted. 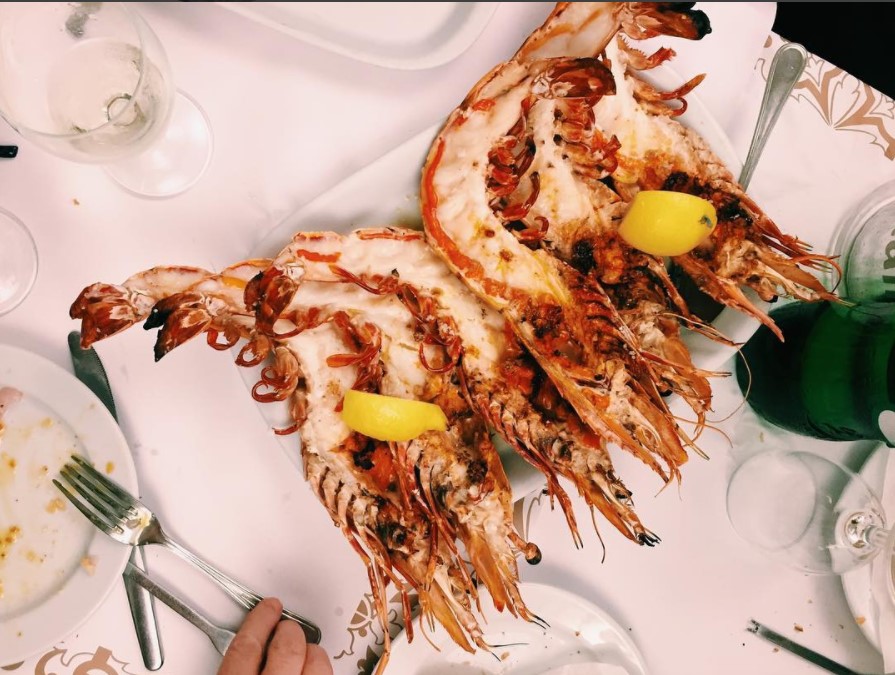 But here’s the kicker: this restaurant serves fish, and only fish. No potatoes. No green beans. Just fish (and bread, of course). When our waiter broke the news to us, we were skeptical. But once the garlicky clams, piping hot (and also garlicky) shrimp, crab meat, and giant tiger prawns arrived on the table, our hesitations swiftly disappeared.

For the next hour, we cracked, shucked, banged, and slurped — until all that remained was squeezed lemon wedges and a very, very dirty tablecloth.

Turns out when you do something as well as Cervejario Ramiro does seafood, the side salads of the world are unnecessary.

I’d be remiss if I didn’t also mention the the Time Out Market, a vibrant, gourmet food hall that was worth the solid half hour of stress desperately trying to track down a table. This Eataly-meets-Urbanspace dining concept opened in 2014, and has since become the number one tourist attraction in Lisbon.

Although there was a fair share of traditional fish and meat options available, I opted for a warm salad with roasted sweet potatoes, squash, arugula, buckwheat, and a poached egg. No photo, though, friends. Like I said, it was hectic.

And if you’re wondering what the breakfast situation was like, I can assure you it did not disappoint. And yes, seafood made an appearance in the form of smoked salmon — along with pillowy scrambled eggs, flaky croissants, dense Portuguese rolls, stewed mushrooms, crisp greens, and all the fresh fruit. 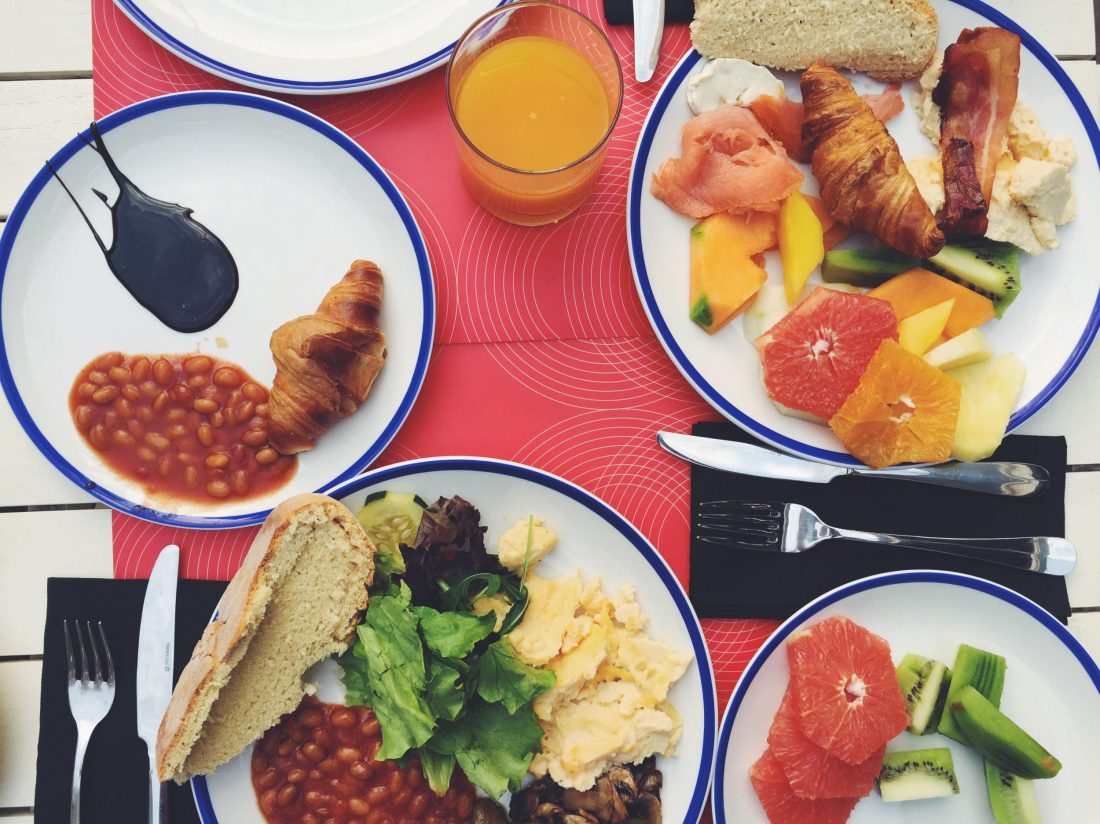 Aaaaand it’s official: I’m in love with hotel breakfasts. Talk about a great way to fuel our days of exploring (read: getting lost and unsuccessfully trying to decipher a physical map like it’s 1999). 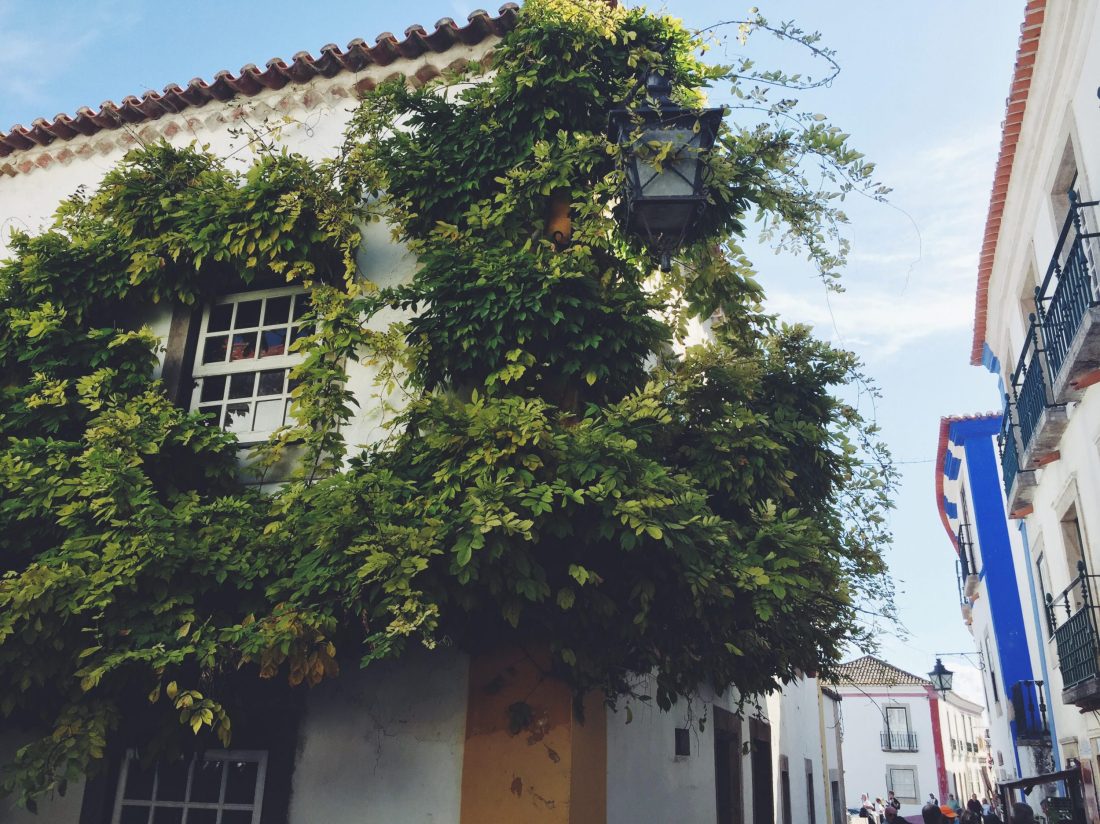 READ MORE: a taste of Saint-Malo

6 thoughts on “a taste of Lisbon”