Every week like clockwork, that’s when I’m hit with a sting of nostalgia for the pre-social distancing days. Because it’s then when, in “ordinary” times, I would routinely mozey across town to the Union Square market—sometimes on a mission to snag the perfect head of cauliflower or handful of baby potatoes, and other times just to wander and actively will myself to let the market inspire me. Even if my refrigerator and pantry were stocked, I would still go. Muscle memory, I suppose.

And while I do have access to fresh produce at my local grocery store and am not, in fact, subsisting exclusively off of canned sardines, garbanzo beans, and salsa, I still ache for the experience of a market. For its palpable energy and fresh air. Its human contact.

So now, every Saturday morning, I instead close my eyes and think about the market. I imagine what foods I’d be buying right now, as winter graciously eases into spring, and I recall how the late-morning light snakes through the bushels of parsley stacked in a precarious pile on top of each other. I picture the faces of farmers I’ve come to recognize, and I make a mental note to introduce myself to them when this is all over. When I can stand closer than six feet away and give them a firm, proper handshake.

I’ve always been fond of markets—Union Square or otherwise. But if the platitude holds any credence, distance away from them will make my heart grow even fonder.

And in the meantime, I hold on tight to my second best bet: memories. 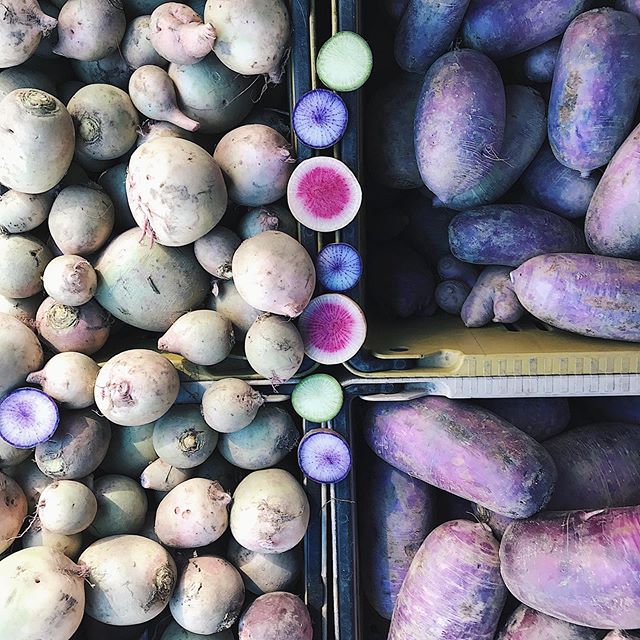 I breeze past the chess players, dodge the wandering toddlers, and screech to a halt as an overexcited dog barking at the barrage of stimulation comes sniffing the ground in front of me with a vengeance. I don’t realize it at the time, but I slow down just a bit when passing the apple stands—crates over-filled with McIntosh, Empire, Red Delicious, and some variety I don’t recognize—to allow the waft of freshly brewed apple cider to reach me, a smell so intoxicatingly warming and comforting that I go ever-so-slightly weak in the knees.

Rounding the corner, I make a beeline for the sauerkraut, picking up a loaf of sunflower flax sourdough along the way. A vendor offers me a taste of their local wildflower honey. I figure, why not?

It’s then when I spot something green out of the corner of my eye. Had someone not pushed aside one of the opaque plastic sheets hanging from the stall’s top—designed, I imagine, to encase the precious produce in a greenroom-esque cocoon and protect it from the blustering winds—I likely would have completely missed the unassuming stall. 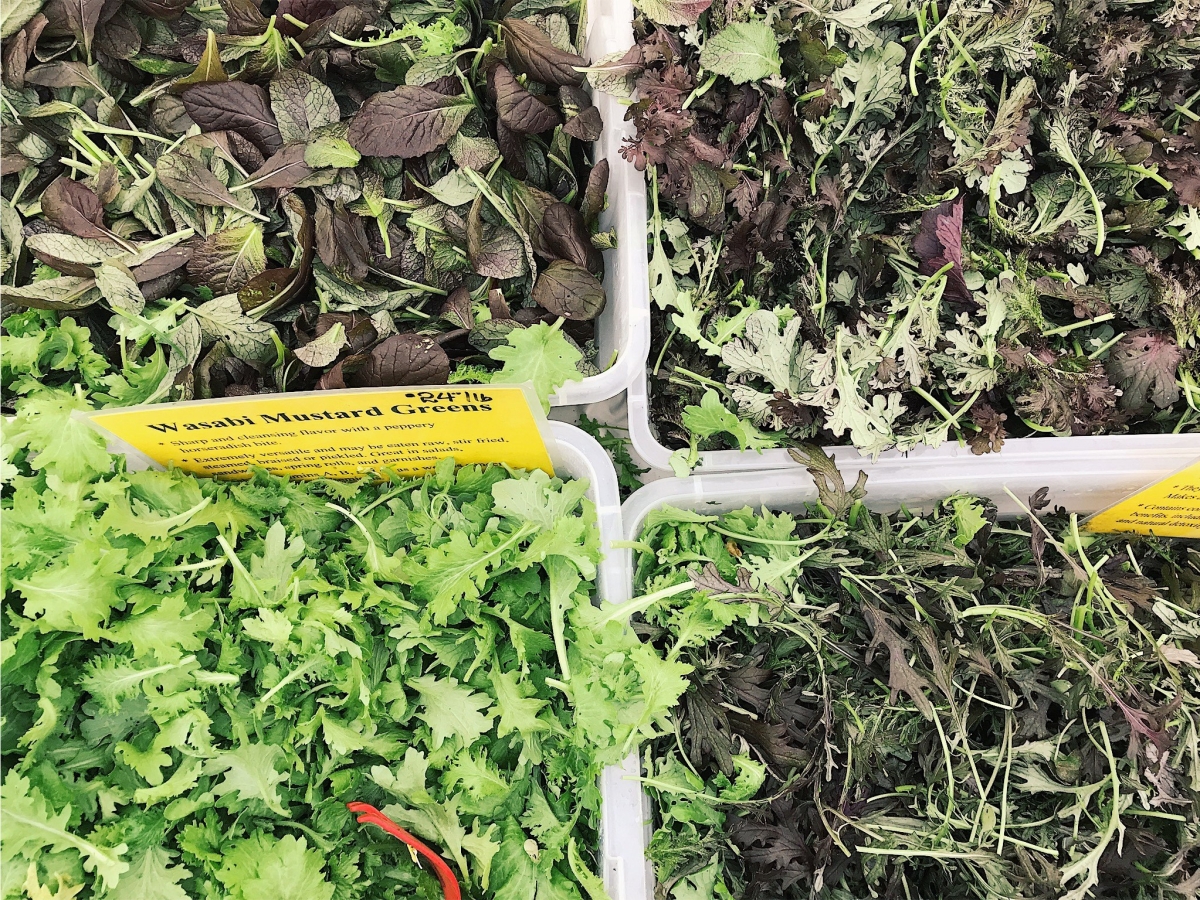 Making my way “inside” the makeshift room, I’m greeted by rows upon rows of plastic bins containing greens—some speckled with purple veins, others a deep and uninterrupted hue of forest green; some thin and wispy, others awkwardly bulky; some wrapped in thin rubber bands, others enjoying free reign. Bitter greens. All of ‘em.

The first thing I notice when walking into the entrance to Pike Place market—right below the iconic sign of social media fame—is the fish. Halibut, and prawns, and oysters, and scallops. Salmon, monkfish, Dungeness crab. Whole and filetted. Some cooked, others raw. Frozen and fresh. But it doesn’t smell “fishy”—a result, I have to believe, of its just-caught, day-of freshness lending credence to the “catch of the day” maxim that’s hastily scribbled on signs and spewed out of the mouths of fishmongers as they theatrically toss their “Catch of the day, everyone! Catch of the day, here!” back and forth to the shrieks, ooohhhs, and aaaahs of tourists.

Whole, large king salmons lay stacked on a bed of ice, one eye glaring up as I weave through the narrow passages between the displays. The tiled floor ever-so-slightly wet, slick with a melting ice and probably some other fluids I’d rather not think about. I do my best not to slip.

The tourist card won’t work when trying to defend myself against the fishmongers all too eager to sell you their catch, which yes, CAN be sealed into an airplane-proof package and yes, WILL last for 48 hours in transit. No excuses. I’m in Seattle. I need to buy seafood.

I reach out to grab what looks like a fugi apple but could also very well be gala or or McIntosh for all I know. Selecting one from underneath the pile, I run my finger vertically from the stem to the base and back up across the waxy surface.

The green skin around the stem slowly fades to a light pink right around the top curve of the fruit. Half-way down, the pink intensifies to a deep radish red only rarely permeated by thin ripples of green. Grabbing the apple by its stem, I prepare to give it one last spin to check for any major blemishes.

I have been in France for about two weeks and, although I feel more comfortable speaking French in public and navigating the streets of Vendôme, I’m still trying to master the art of the weekly market. I don’t know where the best figs are or which stand has crisper haricot verts. Every week, it’s a challenge for me to gracefully weave between the stands and make my way to the cheesemonger for some fresh Camembert while simultaneously avoiding the gaze of the whole fish laid to rest next to their comrades on a bed of ice, staring accusingly at passerby. I still haven’t decided which local honey I want to invest in or whether I should take a chance on the pink garlic from Lautrec, a region in southern France. And, until today, I certainly didn’t know that it was an absolute faux-pas to touch the produce.

I quickly drop the apple back into the crate before my gaze meets that of the farmer whose stern command abruptly interrupts my examination. His white cotton t-shirt is stained with splotches of dark green and speckled with debris from the kale bunches he just transferred out of his truck. Mumbling an apology in the best French accent I can muster at 8AM on a Friday morning, I point to the crate, hold up all five fingers, and smile.

He bags the apples and hands them to me. I add the fruit to my shopping bag that, at this point, is weighing heavily on my right shoulder. After shuffling through the rest of the change in my jean pocket, I reach out to pay. He quickly takes the change, the bulging veins in his hands weaving between sunspots that, at this point in autumn, are the only evidence of warmer days long gone.

“Merci, monsieur,” I say, smiling yet again in an effort to absolve me from my market sins. But to no avail—he’s already bagging a head of cabbage and handing it to the woman next to me.

I turn around and prepare for the trek back into the gastronomic maze of stacked apricot preserves, freshly squeezed fruit juices, and crates of large carrots snuggled underneath their thick green tops when I hear his voice echo behind me.

Spinning around, I half-expect to see something I left at the market stand.

“Oui?” I ask, worried now that I am hearing things and that he wasn’t, in fact, trying to get my attention.

I stare at him, silent, thinking I must have mis-understood. Laughing to himself, he repeats “Welcome to Vendôme.”