I’ll get to the oh-so-delicious food I ate in Annecy in a sec (and if you’re here just for that, feel free to scroll down). But first, allow me a moment of non-food commentary. Because I just traveled solo for the first time, and it’s worth a paragraph or two, don’t you think?

I was never without roommates in college. The opposite, in fact. Freshman year it was a triple, sophomore year an 8-person suite, junior year a 4-person suite, and senior year a 6-person suite. For some, putting so many girls together is a recipe for disaster. And there were moments of petty feuds and bouts of passive-aggressiveness resulting from the simple fact that we lived in such close proximity to each other. For the most part, however, I loved it. There was always someone there if I needed to talk, but it also wasn’t impossible to seek out alone time.

Then I graduated, took a leap of faith, and moved to France by myself for 8 months. Transitioning from living in a suite to living in a studio sans roommates has been a bit of an adjustment. (Let’s just say that at one point, I seriously considered getting one of those life alert emergency response necklaces.)

Despite this change in living situation, I haven’t felt as alone in France as I feared I would because of all the wonderfully generous, compassionate, and hospitable people I’ve met. There have been the inevitable moments of homesickness, but I’ve managed to strike a balance between the time I spend alone and the time I socialize with friends over a glass of wine, good conversation, and lots of google translate.

However much I cherish “me time” and pride myself on being an independent, self-reliant person, the prospect of traveling alone for several days straight was a whole new ball game. And yet, this is exactly what I did this past holiday as I ventured to Annecy, a gem of a city sitting snugly in the Haute-Savoie region of eastern France.

Will people think I have no friends? Will I get weird stares in my hotel? Is it safe for a woman to travel alone? What will I do while I’m eating if I can’t talk to anyone or watch Netflix? (<– serious question)

For better or for worse, I decided to charge full-steam ahead, not letting the fact that I was alone stop me.

The first day was a breeze, likely because I was distracted by the staggering beauty of the snow-capped alps reflected in the crystal-clear blue of Lake Annecy. Soon enough, however, the novelty began to wear off and what was left was silence. Lots and lots of it.

Without the noise or influence of others shaping how I perceive myself or the world, I was forced to confront my unfiltered, authentic self which allowed me to really think.

During mealtimes, I vowed not to take my phone out of my bag (except for a quick snapshot of my meal, of course) because, although tempted by the prospect of scrolling through my instagram feed or cleaning up my mailbox while scarfing down a crepe or hot goat cheese salad, I knew it was just a way for me to evade the awkwardness of the situation when what I really wanted to do was embrace it, learn from it, and really taste the food in front of me in the process.

And because traveling alone afforded me the luxury to do just about anything I wanted, I’ll admit that two-plus hours were spent savoring my coq au vin, using a hearty slice of rustic bread to wipe the plate clean and washing it all down with a glass of local red wine. Every decision I made was of my own accord, and I found myself basking in this temporary window of justified self-indulgence. In fact, to pass the time on a rainy afternoon, I did absolutely nothing but sit in a café, and it was downright spectacular.

Traveling without friends or family taught me how to not just be okay with being alone, but to thrive from it. And by the end of the trip, my fear became confidence, and the initial feeling of loneliness became one of productive solitude.

It also didn’t hurt that dining out in Annecy felt like a religious experience. I’m talking about regional specialties that’ll knock your socks off. SO. DARN. GOOD.

Okay, I’m done talking. Here are some pictures to feast your eyes on.

The aforementioned coq au vin at L’Étage served with carrots, potatoes, and sprigs of rosemary and parsley. 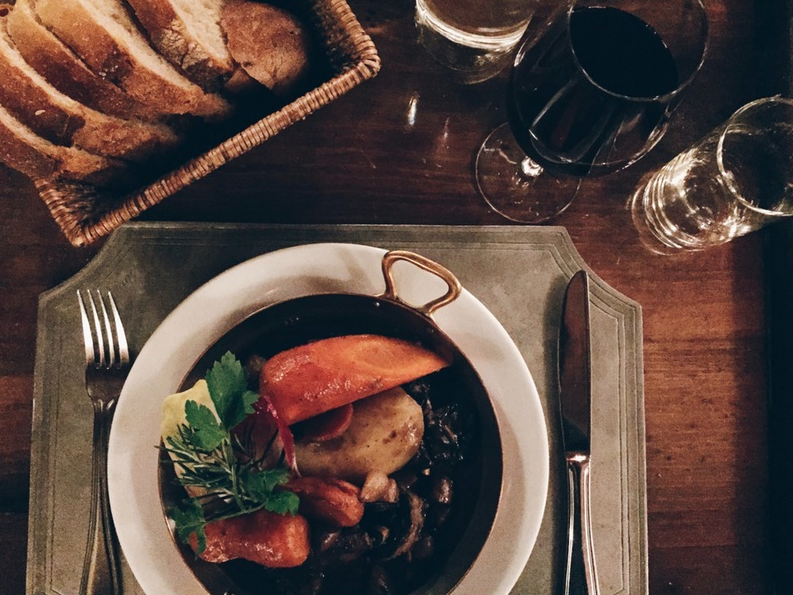 Everyone knows that the French love their cheese, but the locals in the Haute Savoie region take this love to a whole other level. From reblochon to camembert, emmental to raclette, Annecy serves up comfort food at its finest. One of their prized regional specialities is tartiflette, which is basically potatoes, onions, bacon, and cheese baked together into the least waist-friendly dream come true.

This explains the over-abundance of dairy stalls at the market. 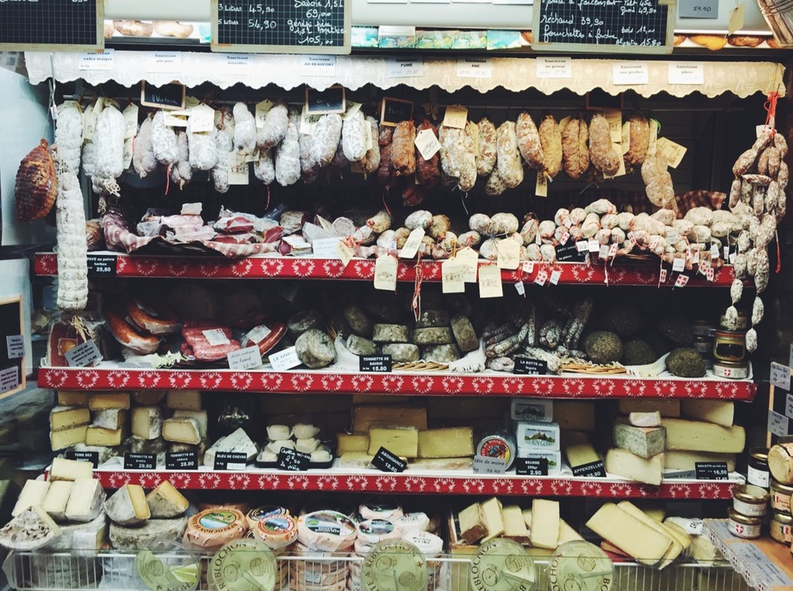 Look – something at the market that wasn’t cheese! 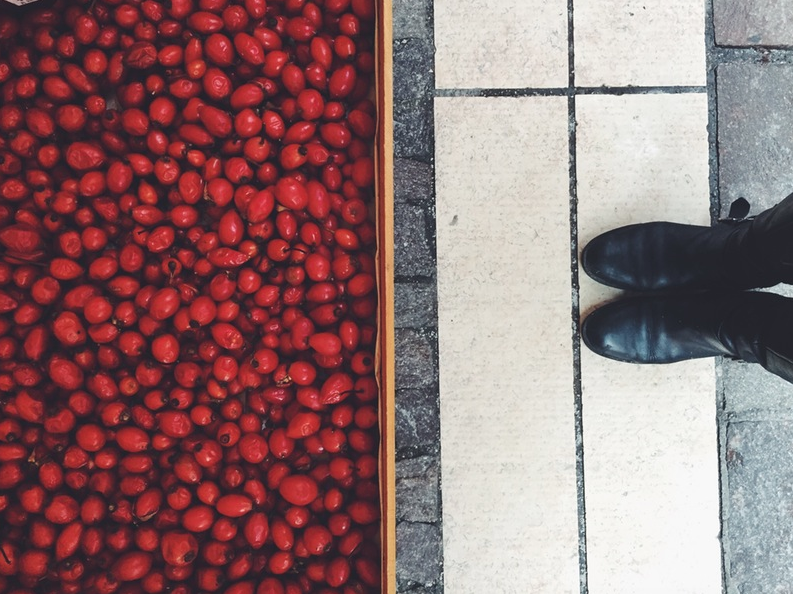 Although galettes are a speciality of the breton region of France, there were quite a few crepêries around Annecy. At Quai Numéro 10, everything is homemade with organic gluten-free buckwheat flour, so I had to give it a try. The addition of ratatouille to the classic ham, cheese, and runny egg combination was perfect. 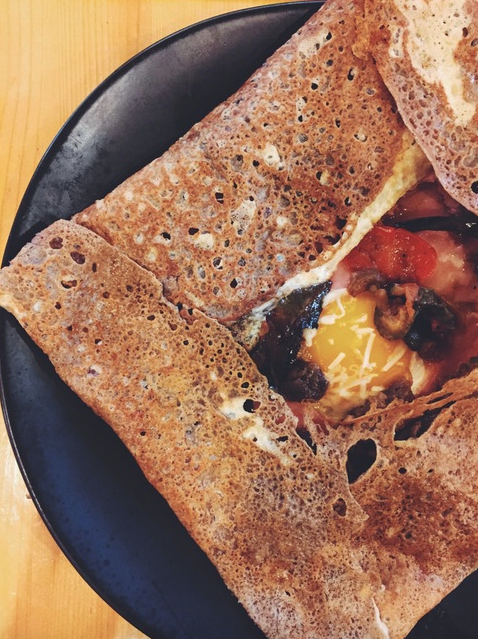 Hot goat cheese salads will never, ever get old – especially at Le Pichet when they come with crisp green beans, tomatoes, carrot ribbons, and a lemon mustard vinaigrette.

I get that people have to keep warm during the frigid Alpine winter, but there’s only so much cheese I can consume.

Granny Smith is a plant-based, veg-friendly café in Annecy and was a welcome departure from the heartier French dishes. This salad was loaded with carrots, beets, cabbage, lettuce, endives, mushrooms, sunflower seeds, pumpkin seeds, brown rice, and a cashew dressing.

17 thoughts on “a taste of Annecy (and traveling alone)”