When I think of Paris, I imagine cast-iron balustrades bordering the Métropolitan signs of the subways stations, wrought iron balconies, elegant cream-colored stonework, and wide boulevards lined with independent bookshops, cafés, and boulangeries.

The Porte de Clignancourt area of the city doesn’t necessarily fit this description.

Situated on the northern periphery of Paris, this diverse neighborhood is home to a vintage flea market as well as one of the Sorbonne campuses where several of my classes were held back when I studied abroad. When exiting the metro, the first thing you’ll notice is street-side vendors selling roasted chestnuts, avocado halves, and grilled corn on the cob. Once you make your way through the maze of portable grills and smoke, you’ll likely then notice the run-down buildings whose walls are riddled with graffiti. It’s a corner of the city that doesn’t attract hoards of tourists, likely because it lacks the classic Parisian charm.

However, since June 2014, there has been a sustainable and green effort to breathe new life into the neighborhood in the form of urban farming. 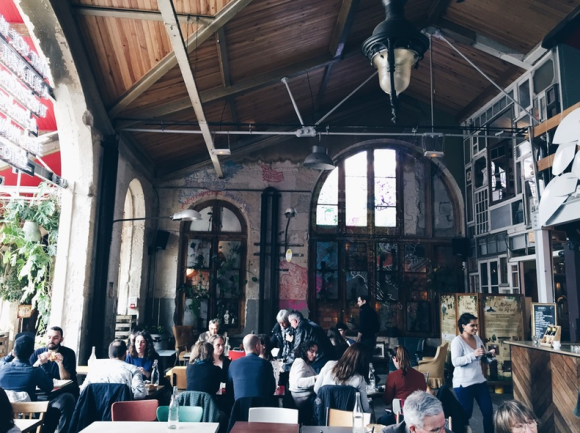 Taking on all of these projects at once may sound ambitious, but they manage to seamlessly coexist in a vibrant atmosphere rooted in sustainable development, ecology, and community. It’s not the sort of place for a quick lunch or coffee to-go. It’s an environment that draws you in, tempting you to linger for a while.

17% of the restaurant’s turnover is reinvested into the on-site events, repair shop, and urban farm.

Developed and planted along the roofs, ledges, and platforms of the station, the farm is complete with 20 hens, 30 fish in an aquaponics system, a worm composter, herb garden, fruit trees, and community vegetable garden. 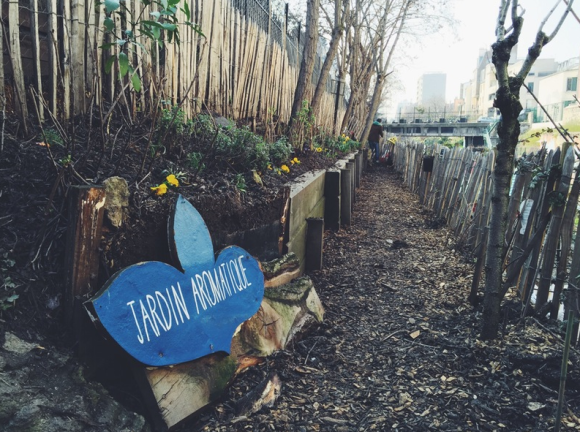 It’s unclear how “futureproof” the urban farming trend is due to its lack of profitability and the fact that energy-dense crops are unable to thrive in such an environment. However, with a recent National Geographic article citing 800 million as the amount of people suffering worldwide from hunger and a PubMed Central report including a projected ratio of 3 urban dwellers to every 2 rural dwellers by 2025, it’s clear that cities have to learn how to feed themselves again.

Urban farming seems like a good place to start.

By taking advantage of unoccupied urban space and growing vertically rather than horizontally, urban farms like La REcyclerie thrive with little soil (and thus less water), expend far less energy, and produce little waste during the harvest period. Furthermore, they foster a greater appreciation for local food among city-dwellers.

La REcyclerie isn’t the first urban farm to pop up in the city of lights. Jardins Passagers de la Villette is a former industrial wasteland turned sprawling thematic garden in the 19th arrondissement while the neighboring 20th arrondissement is home to its own green space, Jardin Partagé Leroy Sème, overflowing with flowers, fruit trees and vegetable gardens.

Head over to one taste at a time’s instagram for more snapshots of life in France.

5 replies on “a taste of Paris, featuring sustainable urban farming”

Hey, I nominated you for the Liebster Award. It is just a fun thing, no pressure. Check my blog to see what this is about 🙂 Cheers!!

This is exactly the kind of place that I, personally, LOVE! I can’t wait to go to the REcyclerie when I’m in Paris in July!!! Encore mille fois merci pour les idées supers intéressantes!

[…] we’re on the topic of dirt, read up on this sustainable urban farm in the heart of Paris complete with an aquaponics system, worm composter, herb garden, fruit trees, community vegetable […]